By Reagan
November 9, 2022 in Political Forum

Agree with this, he just can’t help himself.  I still can’t excuse voters that choose what’s detrimental to the country because they get butt-hurt but come on. 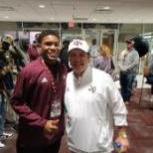 Bottom line, there was no tsunami and most of the blame is at Trump's feet. The red side need's to dump Trump and hitch their wagon to a better candidate. Too many voters are voting against

Trump supporters love him because he's the jerk that they don't have the balls to be in real life.....then they cry that he's a "scapegoat" when the consequences of his actions come around to bite him