Is it time for 1 High school in Beaumont?

The idea of creating one HS for the sake of a winning football team is ludicrous!!

I know the comparison is being made between Allen and Beaumont to demonstrate one high school, but these communities could not be more different. 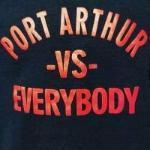